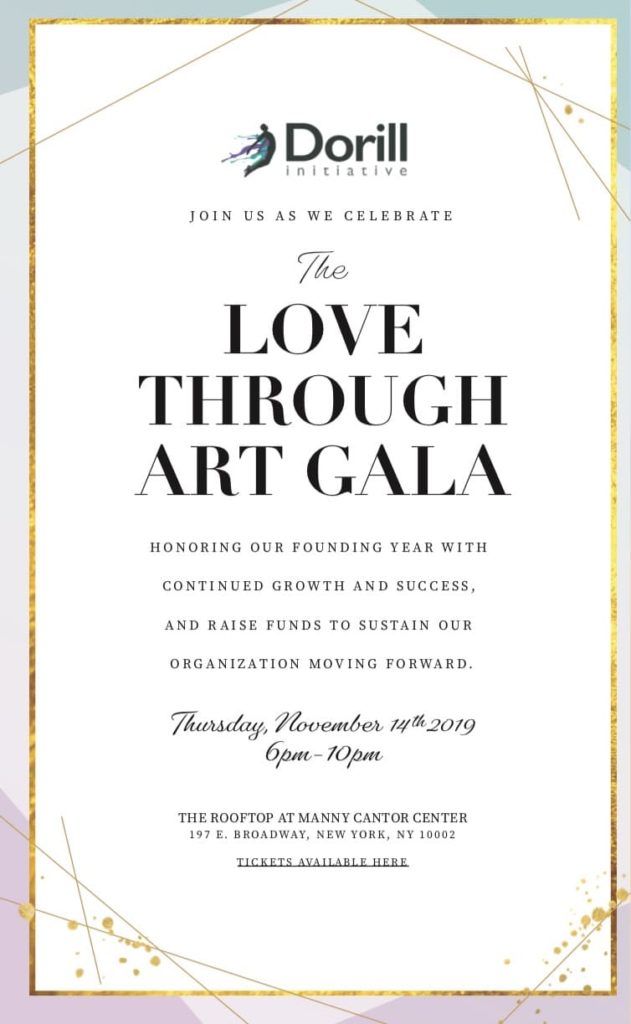 Every dollar donated makes our work possible!
Dorill Initiative is a 501(c)(3) registered non-profit organization. EIN # 82-4767340 For tax purposes, $100 per ticket is nondeductible. Contributions are fully deductible as allowed by law.

$2,500
- Includes four tickets to the cocktail hour, dinner and after party
- Gift of appreciation from #DorillKids

$5,000
- Includes four tickets to the cocktail hour, dinner and after party
- Recognition on all event promotional materials
- Gift of appreciation from #DorillKids.

$10,000
- Includes four tickets to the cocktail hour, dinner and after party
- Recognition on all event promotional materials with quarter-page advertisement in event program
- Company logo or individual's name digitally displayed during event
- Verbal recognition from speaker during event presentation
- Gift of appreciation from #DorillKids

$25,000
- Includes eight tickets to the cocktail hour, dinner and after party
- Recognition on all event promotional materials with half-page advertisement in event program
- Company logo or individual's name digitally displayed during event
- Verbal recognition from speaker during event presentation
- Gift of appreciation from #DorillKids

$50,000
- Includes eight tickets to the cocktail hour, dinner and after party
- Recognition on all event promotional materials with full-page advertisement in event program
- Company logo or individual's name digitally displayed during event
- Verbal recognition from speaker during event presentation
- Gift of appreciation from #DorillKids

Broadway Dance Center is a drop-in dance studio, which means you can stop by any time and take classes from our daily schedule.

BDC offers over 350 classes weekly, taught by some of the world's most renowned teachers and choreographers. Their continued dedication to the international dance community, state-of-the-art studios, and location in the heart of the New York City Theater District makes them the ultimate destination for dancers around the globe.

Flywheel was founded in 2010 with a mission to be different. To be better. And to elevate indoor cycling so you can elevate your performance…and have fun doing it. We believe in strength in numbers. Your numbers. Our technology measures your progress in real time and over time so you can see when and how you improve. Let’s talk first time. Ever try a new workout and feel like everyone's judging you? Better than you? Leaving you to figure things out on your own? We’ve all been there, so we DON’T do that. While our workouts are tough, our vibe isn’t: we welcome individuals of all fitness levels, shapes, and sizes so whether you’re crushing triathlons or have never been on a bike, you can ride with us. From check-in to cool-down, cycling shoes (they’re complimentary!) to bike settings, we’ve got you covered every step of the way.

At Rumble we believe the hour we spend working out can inspire the other 23 hours of our day. We believe hard-working can put on some party pants and shake its hard-working ass. We believe in sharing our good vibes and energy with the world, and that in many ways, it's our most important offering. And more than anything, we believe in each other.

We can only continue our work with YOUR support! Your support of this event leads directly to the success of our program. If you’re unable to attend our event, but wish to make a contribution please click on the “Donate to Dorill” button.
Close Menu

Rain Pryor is an entertainer, director, writer, playwright, speaker, activist, wife and mother. Rain, believes you can create the life you desire, and she wants to assist you in finding your desires. Pryor, is a truly brilliant performer, and director, who is known for her superior work ethic, and integrity. Her performances are thought-provoking, through truthful storytelling, and spot on mimicry. “Fried Chicken and Latkes” is Pryor’s award winning solo show, a hilarious and heart-wrenching story growing up black and Jewish in a politically incorrect era. Her father was comic genius Richard Pryor, and her mother a Jewish GOGO dancer, turned astronomer. Discover how Pryor finds her identity in both worlds and works to change ours. “Fried Chicken and Latkes” is currently in series development with Norman Lear, Olive Bridge and MGM, where Pryor is writer, actor and executive producer.

Luis Salgado is a Puerto Rican performer, director, choreographer, and producer. His career has led him to Broadway, film, television, and stages around the world. He is “one of the young Latinos on Broadway who has dedicated his entire life to both dance and social work” as quoted on Broadway World. Luis is a true leader who lives full of passion, fire, and a commitment to going beyond. A unique style, influence of Latin rhythms and his heritage make Luis a stand out among dancers. His ability to “dive right in” makes him an artist and a visionary who makes things possible at times against all odds. Salgado has come on strong with his love for theatre plunging into every aspect of the art form, including producing. This Puerto Rican artist is a versatile performer whose career has molded him into an internationally established director, choreographer, and a teacher that brings a unique passion to the classroom.